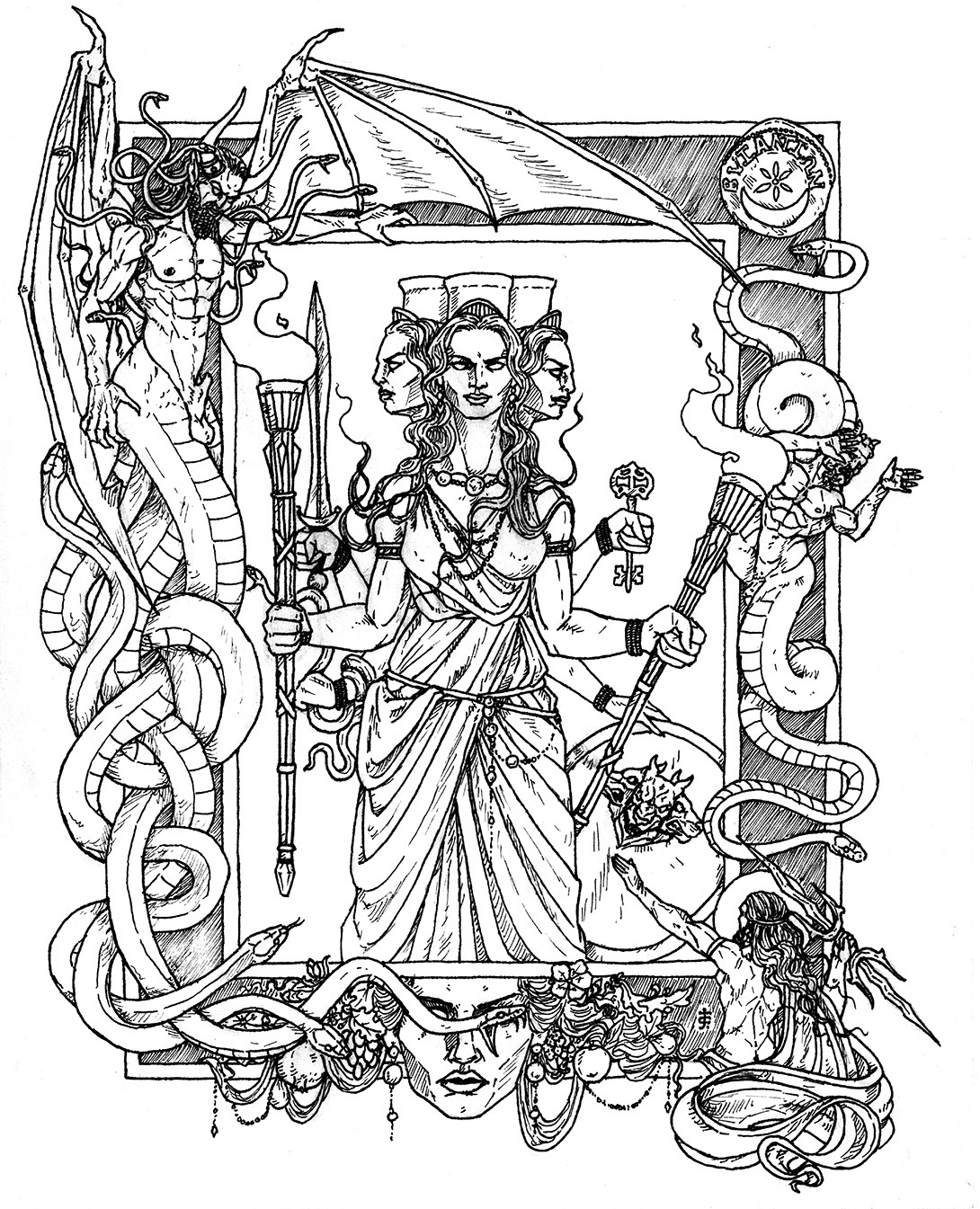 Now that the book is out, witches all over the world are getting the first glimpses of the never before seen artwork that makes up the “Artist Panels”.

The first panel I want to introduce you to is ‘Hekate Soteira’, or ‘Hekate the Saviour’. Hekate Soteira is by far one of the most popular cult titles among modern devotees. It is also the cult title favored by the Chaldeans, and a central divinity in the Chaldean Oracles. So who is She in this epithet? Quite literally She is a savior Goddess, a fierce guardian, and the slayer of Giants. When we look at this aspect of Hekate it is one that often takes on a sort of soft-monotheistic undertone. Typically those who serve Hekate Soteira worship Her almost exclusively. She is the Cosmic World Soul, All Powerful, All Nurturing, a mostly benevolent side to the Goddess, balancing Her darker aspects.

Because Hekate Soteira has become so closely linked with the Hekate of the Chaldean Oracles, the monotheistic vibe is understandable since the Chaldean Oracles themselves seem to be promoting soft monotheism. Hekate in the Chaldean Oracles is a sort of manifestation of The Father, born from Him as the womb of Life-Giving Fire. This makes Her the perfect candidate for Goddess cults as a central and sole divinity that can stand alone, fulfilling the devotee’s every need.

If we want to look at a more polytheistic side to Hekate Soteira, we can find it in the Hekate of the Gigantomachy, by Apollodorus that inspired this Artist Panel. In the myth, after the Gods defeated the Titans, Gaia (depicted at the bottom of the panel) sent Her children, the Giants, to avenge Them. Hekate fought and defeated the giant Clytius by immolating the beast with Her torches (depicted on the right of the panel). When the Giants were defeated, according to Apollodorus, Gaia became even more angry and spawned the largest of all Her children, Typhon, by having intercourse with Tartaros. Typhon represents the violent and life-threatening aspects of Nature, if the Greeks had a concept of the Devil, Typhon would be the closest match. Despite Typhon’s immense power and colossal size, Zeus was victorious (depicted on the left and bottom right of the panel).

The last element of this panel is the Byzantine coin at the top left. This pays tribute to Hekate Soteira Who protected Byzantium from Philip of Macedonia in 339 BCE when he attempted to take the city by surprise at night. It is said that Hekate caused all the dogs of the city to bark and howl, and illuminated the sky with a phantom light from Her torches, revealing the army. Achieving victory, the Byzantines credited their win to Hekate and erected a temple to Her. They gave Her the symbol of the star and crescent which they struck on their coins to commemorate the occasion.

Each element of this panel is meant to evoke the immensely protective, all-conquering power of Hekate Soteira. That despite the foe She or Her devotees face, no matter how Gigantic, they can and will be defeated.

For me, I associate this aspect with the protective properties of bronze, iron, and steel. I use these metals for vessels and charms made in Her honor that ward my home from enemies, physical and spiritual. To a bronze, iron, or steel vessel that has a lid, add flint, and or other protective stones like carnelian, strong lodestone, and black tourmaline, materials such as hair, teeth, or bones of dogs, herbs such as wormwood, bay, oak, rosemary, rue, vervain, oregano, clove, and camphor, and a petition paper with a conjuration of protection to Hekate Soteira along with Her symbol, the star and crescent. Add a small splash of white wine vinegar, honey, and your favorite protection oil. Fan in some smoke from a resinous incense such as frankincense, or better yet, black Ethiopian incense, or pontifical incense. Hang this by the front door or bury under your doorstep! This can also be adapted into a charm to hang around the neck using a small wearable leather pouch. Just add tiny bits of the metal to the bag which can easily be found online in coin form.

Get your copy of ‘Liber Khthonia: A Contemporary Witchcraft and Devotional Tradition of Hekate’ now at www.jeffcullenartistry.com/book

3 thoughts on “The Artist Panels of ‘Liber Khthonia’: Hekate Soteira”