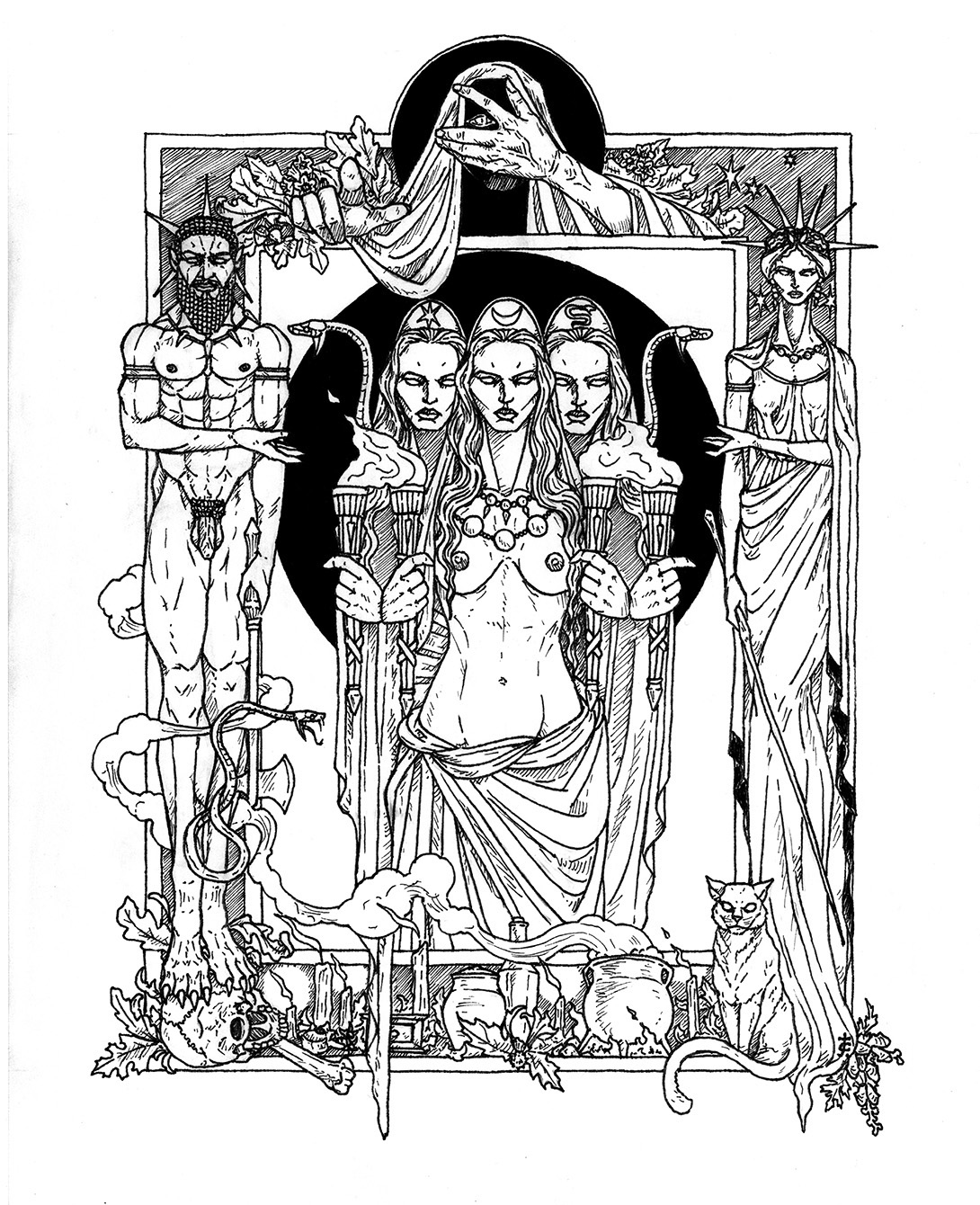 The limited edition of ‘Liber Khthonia’ includes an exclusive slip case with an 8th panel, ‘Hekate Triformis’, the ‘Three Formed Hekate’. For the central image of Hekate, I modeled Her after the 3rd century CE Roman ‘Statue of the Triple Hekate’ located at the Museum of Antalya in Turkey. It is among my favorite images of Her, each of Her three faces turn their attention toward the viewer with a powerful, piercing gaze, the fires of Her torches joining together, connecting Her forms as one.

This was the perfect iconography to depict the triple realms of Hekate that are central to the book. They are: the Black Earth symbolized by the serpent on the crown on the right, the White Air symbolized by the crescent Moon in the center, and the Fiery Ether symbolized by the six-pointed star on the left. She is bare-breasted signifying Her role as Queen of Witches, and Her hair coils with snakes. The Goddess’s three-formed apparition eclipses the Dark Moon behind Her.

Aside from Hekate Herself, this panel allowed me to depict something new, that I have always wanted to depict… Hekate’s parents. According to Hesiod in his ‘Theogony’ Hekate’s parents are Perses and Asteria. Hesiod is the earliest poetic reference we have for Hekate, dating from around the 8th century BCE. For me personally Hesiod’s genealogy of the Gods makes up the foundation of my beliefs in that one can easily see the science of Creation in it. That is why in my personal cult Perses and Asteria are my default parents.

Many modern witches and devotees of Hekate like to reference Hesiod when trying to make the case that Hekate was not always associated with the darker aspects of the spiritual world. Because his work is so early, and does not reference witchcraft, necromancy, or ghosts specifically, these concepts must not have existed at this point, and are actually later additions. While it is true, the Hekate of Asia Minor was probably linked to a sort of Kybele type Goddess, there isn’t enough evidence to say She did not have Her darker functions even then. Through the parentage of Hekate, we actually see that indeed, Hekate must have had some darker side that was not touched on in ‘Theogony’.

When we look at the genealogy of Gods in Hesiod’s worldview it tells us a lot about how different natural elements interact and create. For example, Gods of Darkness such as Nyx and Erebos sire divinities humankind fears: Death (Thanatos), Impending Doom (Moros), Violent Death (Ker), or nocturnal acts like Sleep (Hypnos), the Dreams (the Oneiroi), and even Sexual Intercourse (Philotes) just to name a few. Okeanos and Tethys sire the Rivers, the Okeanides, Hyperion, God of Light, and Theia, Goddess of Brilliance sired Eos, Helios, and Selene, and so on. What does this mean for Hekate’s parentage, and Who exactly are these Titanic Gods?

To the right of the panel is Hekate’s mother, Asteria. Her name means ‘Starry One’ and She is the daughter of Polos, the Titan God of the Celestial Poles, and Phoebe, the Titan Goddess of Brilliant Prophecy (or the brilliance of the ethereal skies, and the luster of precious metals and gemstones). Through Her parents Asteria inherited the rule of nocturnal divination through observing the stars (astrology) and prophesy through dreams (oneiromancy). She is the Titan Goddess Who gives us lucid dreams, or signs of what’s to come. She is also the patron Goddess of all astrologers. As a primordial Goddess, Asteria is, and always has been, central to witchcraft. It is because of Her that we could explain how most of our witch’s art is dictated by the position of planets and stars, or the phase of the Moon. In the panel, She is depicted in the style She appears on the 5th century BCE red-figure amphora located at the Museum of Fine Arts Boston. Her seven-rayed crown represents the seven classical planets and around Her shine six-pointed stars, the stars of the Fiery Ether. In Her hand is the divining rod She uses to send prophesies and conduct the Heavenly Bodies. Without a doubt, Asteria is a prolific, undeniable Witch-Mother.

Moving to the left of the panel we find quite possibly the first devotional iconography of Hekate’s father, Perses, Titan God of Destruction, Whose name means ‘The Destroyer’, or ‘The Ravager’. He is the son of Krios, the Titan God of the Southern Pillar, Whose name means ‘The Ram’, also called ‘Megamedes’, ‘The Great Lord’, and Eurybia, the Titan Goddess of Wide-Force. Hesiod mentions that Perses is ‘preeminent among all men in wisdom’. Perses Himself is associated with Sirius, the Dog Star that makes up the 5-pointed star He is crowned with on the panel. As I mused over Perses when I was trying to decipher how His presence felt I kept recalling images from the East, the direction of His constellation, leading to Mesopotamia, and one God Who shared much in common with Perses. That God is Nergal, the Lord of the Underworld, and God of War and Destruction. From this God I took the Serpentine War-Ax signifying Perses’ destructive side (the root of His name has also been translated to ‘to sack in war’), and gave Him a distinctly Persian style again referencing the East. Because He is associated with Sirius, as well as the constellation Canis Major He is believed to have dog-like features (just as Hekate is sometimes said to have), which is depicted in His canine feet. Another curious fact that lends to His title as Witch-Father, is that a Titan Goddess Who shares His name is a Witch-Mother in Her own right. That Goddess is Perseis, the mother of the witches Kirke and Aeetes by Helios.

Above The Divine Family looms Erebos, Darkness, Who calls to us witches who dare to meet His gaze. Below are situated the tools of witchcraft such as the Sacred Vessel and the cauldron, plants such as datura, aconite, henbane, belladonna, and oak, and a traditional witch’s familiar in the form of a cat, an animal that works as a messenger for Hekate, whose name was once Galinthias, transformed into a cat by Hera, and taken in by Hekate. It should be noted that many will reference Galinthias as a polecat rather than a feline, but this is due to the fact that the ancient Greek word ‘ailouros’ (αἴλουρος), or ‘aielouros’ (αἰέλουρος) was used for cats as well as polecats and weasels. In my personal cult, however, being a witch cult, I maintain that Galinthias is a cat. This was also confirmed some years ago in a dream to my husband who had no knowledge of this myth.

This panel is above all about Hekate’s very clear inheritance of Her title, Queen of Witches. Her Celestial lineage forged Her into the embodiment of witchcraft as we know it, and as it has been known throughout history. It is fueled by the brilliant ether of the Witch Flame She received from Her maternal grandmother, guided by the power of the stars and planets of Her mother, a wide-reaching force given to Her by Her paternal grandmother, and can be terrifying and destructive, something to fear, reflected in Her father. Like we receive a little of each of our parents and grandparents, so too do the Gods. We are micro-reflections of Them, and when we dare to stare into the Darkness and not turn away from His eye, when commune with Them in our rituals, our witchcraft, and delve deeper into Their myths, all Mysteries are revealed!

Get your copy of ‘Liber Khthonia: A Contemporary Witchcraft and Devotional Tradition of Hekate’ now at www.jeffcullenartistry.com/book

1 thought on “The Artist Panels of ‘Liber Khthonia’: Hekate Triformis”

Leave a Reply to Marius B Rozenberg-Holszanski Cancel reply